Villány is Hungary’s southernmost wine-district, covering 2,000 hectares of vineyards. The wine-district’s most popular settlement is Villány, which is justly famous worldwide for its red wines, winemakers, cellar terraces and events. 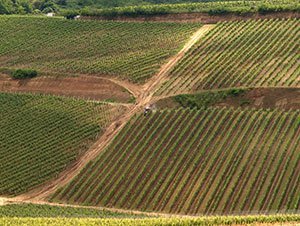 Apart from its marketable wines, the Villány success story is due to an annual increase in tourism: this is thanks to the international successes gained by its winemakers, hospitality, a number of quality festivals and a conscious development of infrastructure. Take a break from the humdrum workaday life with the Bocks of Villány!

There is evidence that Romans were occupied in viticulture in the Villány area. At the beginning of the Turkish period the region was characterized by widespread production, but later, due to continual fighting, many of the vineyards were destroyed.

In the seventeenth century Villány was rebuilt, but closer to the vineyard slopes than before. At this time the village was largely inhabited by Serbs, and the vineyards were also cultivated by Serbian “Rác”, who for the most part settled on the hillsides.

In the mid-eighteenth century increasing numbers of German speakers settled in the villages around Villány (these German settlers brought with them the wine earlier known as Kékoportó). According to documents the overwhelming majority of villagers were German, with a small number of Rác. They lived a serf’s life, though with the right to move freely which, however, the German serfs did not make use of as they had created a thriving agriculture and viticulture which they dide not wish to leave. They settled every scrap of land, so that the woods were pushed back to the hilltops until disappearing utterly to give way to vine plantations.

In the nineteenth century the demand for Villány wines grew both domestically and internationally. Until 1848 the serfs were only allowed to sell their wine between September 29 and April 24 (from St. Michael’s Day to St. George’s Day). Once this law was repealed the opportunity came for market success for the serfs.

Expanding market opportunities and the cultivation of grape types that made excellent wines made it possible for the wine district to make conquests in the international market. Development in the grape-and-wine sector was broken with the phylloxera blight which spread across the entire country. Phylloxera raised its ugly head in Hungary in 1875, with dire, irreversible consequences for Villány, which suffered terrible damage over the next twenty years.

With the destruction of the epidemic Villány began reconstruction of the vineyards relatively early. In this gargantuan and highly responsible work an extremely large part was played, both nationally and internationally, in the efforts of the Teleki family. Almost twenty years were to pass before the production area returned to the level of that preceding 1875.

At the beginning of the twentieth century the quality of viticulture rose to a new level in Villány. This development was, however, broken off with the First World War. The southern Serbo-Croatian areas, which had been an important market for the wine-producers, lost their earlier significance with the advent of the War. After the war there was a massive surplus of wine not just in Villány, but throughout the country, the reason for which was the area of the country had shrunk to a third and that the potential markets had diminished considerably. Relative development between the world wars was followed by a gigantic economic slump. After the war, Soviet occupation led to terrible repercussions in Villány and the surrounding villages. A large part of the German population was deported, many of them to labour camps in the Soviet Union. In their place came landless workers and their families from the Nyírség (present-day north-east Hungary) who knew precious little about vine cultivation and wine.
National policy no longer allowed the running of smallholdings and encouraged large-scale agriculture on the Soviet model, and so began the nationalisation of private cellars. Under socialism it was Villány that played the largest role in large-scale viticulture. Between 90% of the vineyards were under state ownership, with just 10% being privately owned. Large-scale wine production resulted in the fading away of the reputation of Villány’s wines both at home and abroad, which from the 1990s the wineries, now in private hands, have tried to re-establish through hard, consistent work.

The unique character of the Villány Wine District comes through its multiethnic population, the mingling of various wine cultures and steadfast, resolute labour. You can find everything here, from the classical small family cellar via the modern processing plant to the traditional large estate.

Villány is one of the most dynamically developing wine districts, brought forward by a united community with a conscious wine-marketing strategy and wines of exceptional quality.

The natural conditions of the Villány Wine District

The secret of the Villány Wine District’s superb wines lies in local conditions and professional expertise. As the rolling slopes of the Villány Hills progress to the Dráva ever-thickening strongly limestone layers have built up containing marl and loess, meaning that up until the Dráva high-quality soils rich in nutrients with a deep layer of humus have formed. This, one of our country’s largest, continuous territories of humus carbonate contains favourable microelements; because of its high nutrient content it is especially suitable for vine cultivation, in particular of the grape types producing high quality, harmonious red wines with their high extracts.

Due to the geographical location of the Villány Wine District, the characteristics of three climates can be found in this region. Nationally, here we have the most hours of sunshine with between 2070-2100 hours annually. The growing season begins earlier on the southern slopes of the hills than elsewhere in the hills. This allows for an early start to work in the vineyards. The mean temperature for the growing season is 17,5 °C. The difference in temperature between the southern and northern slopes can be as much as 4-6 degrees.

A variety of microclimates have evolved in the various parts of the hills; these have resulted from the mutual effect of Mediterranean, continental and oceanic currents. On the southern slopes it is the Mediterranean that predominates. That is, spring comes early, while the summer is warm and sometimes very hot.

As a rule there are two annual rainy periods: in spring and the end of autumn. Hail is frequent, but winter and spring freezes rarely cause damage in the hills. The Bock cellar works 75 hectares, most of which can be found in and around Villány.

Take a look at our special offers and package deals!:
(HU)

Let’s subscribe for our newsletter to get first-hand information about us!